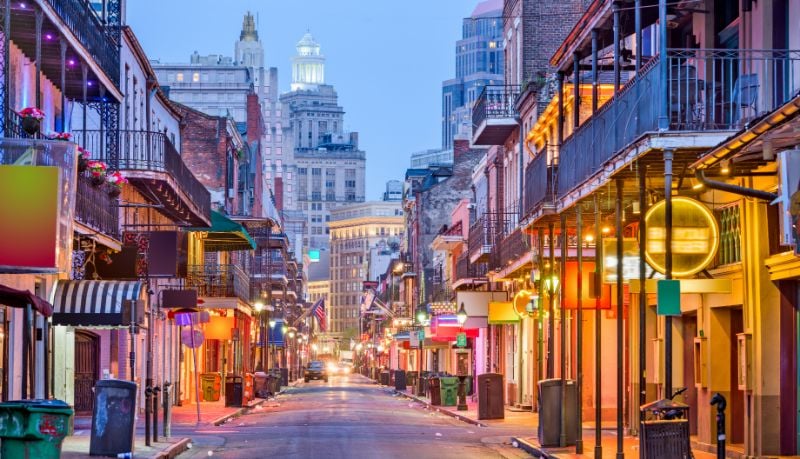 The 78 square blocks that make up the New Orleans French Quarter are easily the heartbeat of the Crescent City. It’s the biggest tourist attraction in the state, and not just for its famous Bourbon Street. Which, fun fact, Bourbon Street is not named after the alcohol.

Although it’s known for the plethora of bars that line the street, it was actually named after the House of Bourbon, the ruling family of France when the city was being mapped out in the early 1700s. There are 73 neighborhoods within New Orleans, and the French Quarter was the first, and subsequently the oldest neighborhood in New Orleans. The entire neighborhood was designated a National Historic Landmark and attracts folks from all walks of life every year.

While the French Quarter certainly has a bar or two where you can sip a sazerac or a hand grenade (just two of the many cocktails New Orleans invented), it’s also a great place to grab dinner, and there are just as many restaurants as there are bars in the Vieux Carré. From roadside Lucky Dogs to elegant white tablecloths, there’s a restaurant for everyone.

I think it’s important to take a moment to recognize the difference between Cajun and Creole cuisine before we go on any further. These terms often get used interchangeably when in fact, they are completely separate cultures with separate culinary influences and flavors.

Louisiana as a whole tends to get lumped into Cajun cuisine, and while you’ll certainly find Cajun dishes in the French Quarter, Creole cuisine is more of the standard fare here in New Orleans. Both Cajun and Creole are Louisianian, but Cajun food is typically found in central/western Louisiana near Lafayette, Abbeville, Breaux Bridge, and even as far north as Ville Platte.

This region is known as Cajun Country. Cajuns are an ethnic group of Acadian descent. If you remember your history books, Acadians were French settlers who made their way to Canada and then exiled and eventually found their way to southern Louisiana in the 1700s. There’s much more to the story, but we’ll keep it brief.

On the flip side, Creoles are a little more difficult to define. Most historians will agree that Creoles are influenced by European, African, Caribbean, and Hispanic descent, and you’ll see this played out in the food. Think of it like a “best of” from all of those cultures.