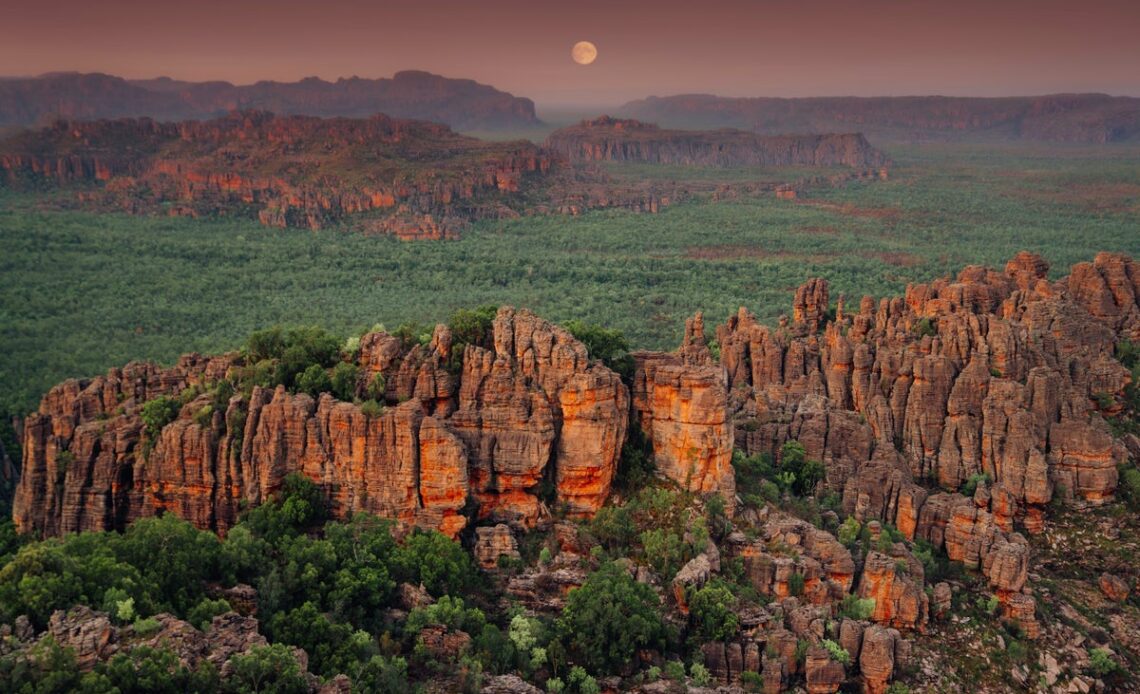 Monuments to the power of small creatures punctuate the Top End of the Northern Territory. Three hours’ drive east of Darwin along the Arnhem Highway, nature and humanity converge to spectacular effect at Australia’s largest national park, Kakadu. But allow a little longer to enjoy the natural roadside attractions along the way. Those towering tombstones flanking the highway look as though they were sculpted by the elements over millions of years. In fact, they were made by millions of termites in the course of a few decades. Larger creatures abound too: keep a sharp eye open for wallabies and even the occasional wild horse and buffalo.

A large and elaborate sign means you can’t miss the entrance to Kakadu National Park – gateway to a wilderness that is the same size as the entire nation of Wales (20,000 square km). Kakadu is one of those rare places that appears twice on the Unesco World Heritage List: once for nature and a second time for culture.

Since Kakadu was designated as a national park in 1980, sustainable tourism has involved the traditional custodians of the land – who today interpret and explain the landscape and its artistry for visitors.

In conventional art galleries, works are displayed outside their original context. Here in Kakadu National Park you encounter rock art where it was created. I was shown around some of the 5000 rock art sites by James, who belongs to the Bininj nation. He takes tourists time travelling as he interprets one of the oldest art galleries in the world – where every work has a meaning to First Nations culture.

Some of the most spectacular examples are at Burrunguy, beneath a dramatic escarpment. The rock art is protected by the Bininj clan, and not all of it can be filmed or photographed out of respect for the people depicted. A guide will help you respect the culture – and understand the stories told by the artist.

Much of the rock art was created in shelters where people have lived for millennia. “This specific shelter that we’re standing in here was used for at least 20,000 years,” says James – a reminder that Australia is the world’s oldest continuous living culture.

A million stories are reflected in the rock art of extraordinary antiquity.

Nature has embroidered Kakadu with rivers, creeks and billabongs – trapped bodies of water. You can explore the land and water that…