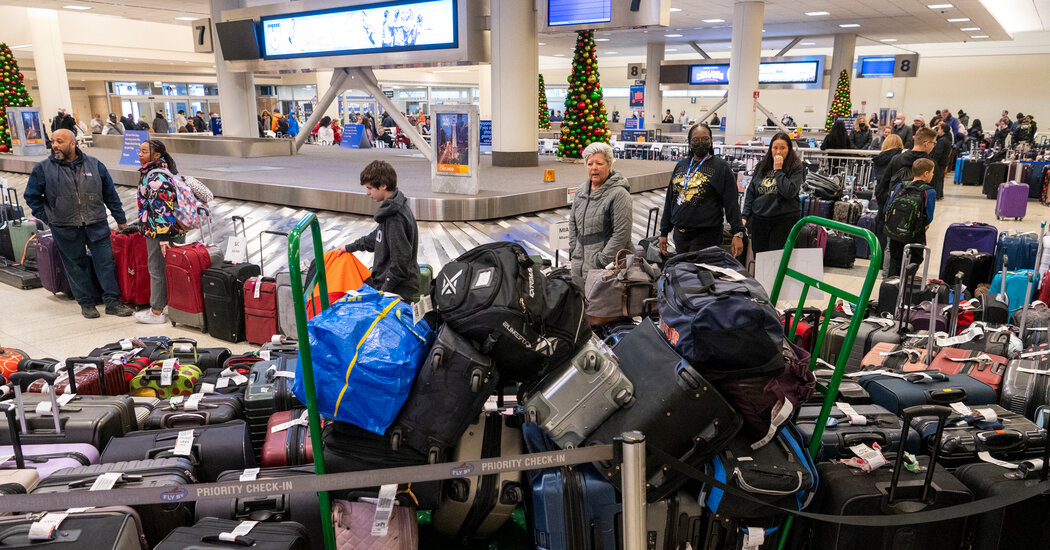 Thousands of stranded holiday travelers were no closer to home on Tuesday, as the aftermath of a deadly winter storm that grounded flights and throttled plans over the holiday weekend continued to play out at airline counters across the country.

Disruptions were likely to continue throughout the week at airports, where canceled flights caused weary homebound travelers to sleep on floors and wait hours in line for customer service.

By 5 a.m. Eastern time on Tuesday, more than 2,800 U.S. flights were canceled and nearly 600 others delayed, according to FlightAware, a flight tracking service. Most of the cancellations — nearly 2,500 of them — came from Southwest Airlines, which had already called off more than 60 percent of its flights for the day.

Tuesday’s unfolding chaos followed similar scenes on Monday, when more than 4,000 U.S. flights — most also operated by Southwest — were canceled and more than 8,500 others delayed, FlightAware reported.

Southwest Airlines said in a statement on Monday that the travel disruptions were “unacceptable” and that its network was behind because of the winter storm that slammed parts of the country with heavy snow, ice and strong winds much of last week. “Our heartfelt apologies for this are just beginning,” the company said, adding that it was working to address the disruptions by “rebalancing the airline and repositioning” crews.

By late Monday and into Tuesday morning, Southwest was in damage-control mode, responding to angry and frustrated customers on Twitter. The airline repeatedly apologized for the cancellations and offered assistance through direct messages, which did not appease everyone. The U.S. Department of Transportation said in a statement on Monday that it would look into the Southwest issue, adding that it was concerned by the airline’s “unacceptable rate of cancellations and delays” and reports of poor customer service.

Southwest’s network is organized in what is known as a point-to-point system, according to David Vernon, an airline analyst at the financial firm Sanford C. Bernstein. That type of system enables higher use of planes during normal times but can cause cascading negative effects when things go wrong.

No single region or airport bore the brunt of the cancellations. On Tuesday morning, more than 150 flights originating at Denver International Airport, or about 17 percent of its outgoing traffic, were canceled, and more than 110 flights, or about 38 percent, were…