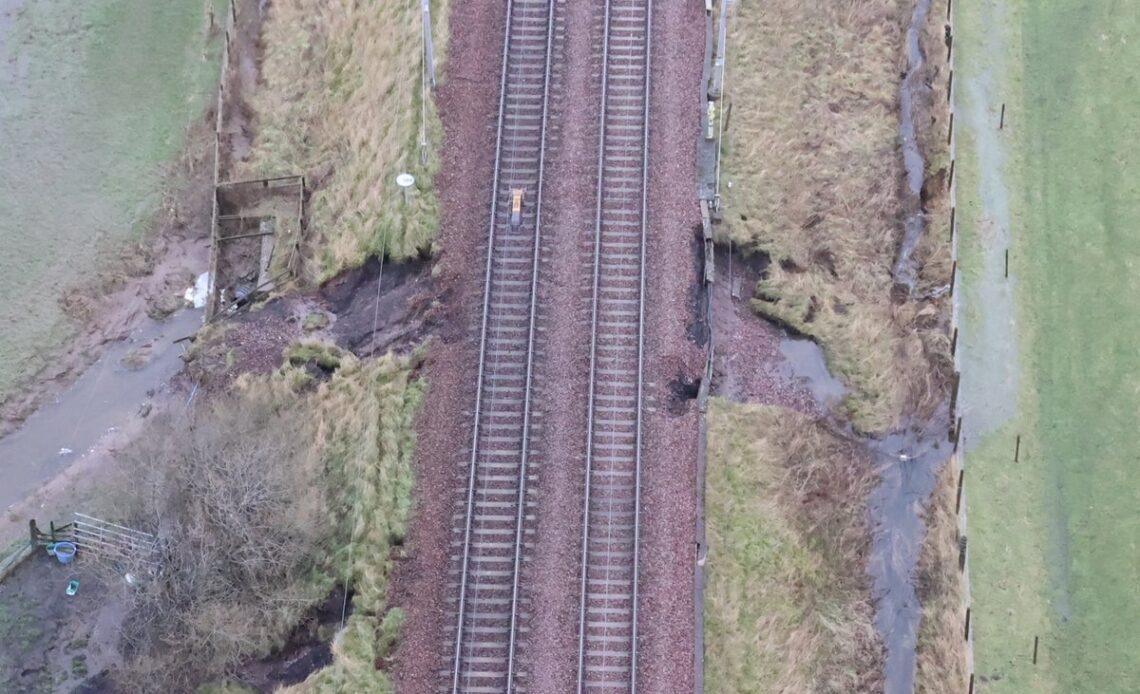 As rail passengers prepare for a new year of chaos with multiple strikes, one of the two routes between Scotland and England has been closed after severe flooding caused a landslip.

The West Coast main line between Glasgow and Carlisle was suspended on Friday near Carstairs. Network Rail said it will require extensive work to stabilise and repair the foundations of the tracks to allow the railway to reopen safely.

A 40-metre section of the line has been affected by the landslip. Engineers are removing mud from the site and will then reinforce the area with over 200 tonnes of new stone.

The track will then need to be re-laid and signalling systems in the affected area checked.

A Network Rail spokesperson said: “This is a very challenging project, but we understand the inconvenience closing the line will cause to customers and are working hard to reopen the railway as quickly as we can.”

An Avanti West Coast spokesperson said: “Customers are being advised not to travel north of Carlisle as there are no services.

“An amended timetable is in place between Carlisle and London Euston.

“If you are no longer able to travel, you can claim a full fee-free refund from where you bought your ticket.”

Passengers could alternatively travel on the East Coast main line from Edinburgh via Newcastle to York and London.

The week-long closure began ahead of the next round of national strikes.

More than 40,000 members of the RMT union working for Network Rail and 14 train operators will walk out for 48 hours on 3 and 4 January, and again on 6 and 7 January.

On the intervening day, Thursday 5 January, thousands of train drivers belonging to the Aslef union, who work for 15 train operators, will strike.

All the unions say they want a fair pay rise, assurances on job retention and no changes to working conditions without negotiation.

Avanti West Coast had planned to run hourly services between Glasgow and London on the RMT strike days. These will now run from Carlisle.