The Cheetahs Made a Kill. Then the Safari Trucks Swarmed In. 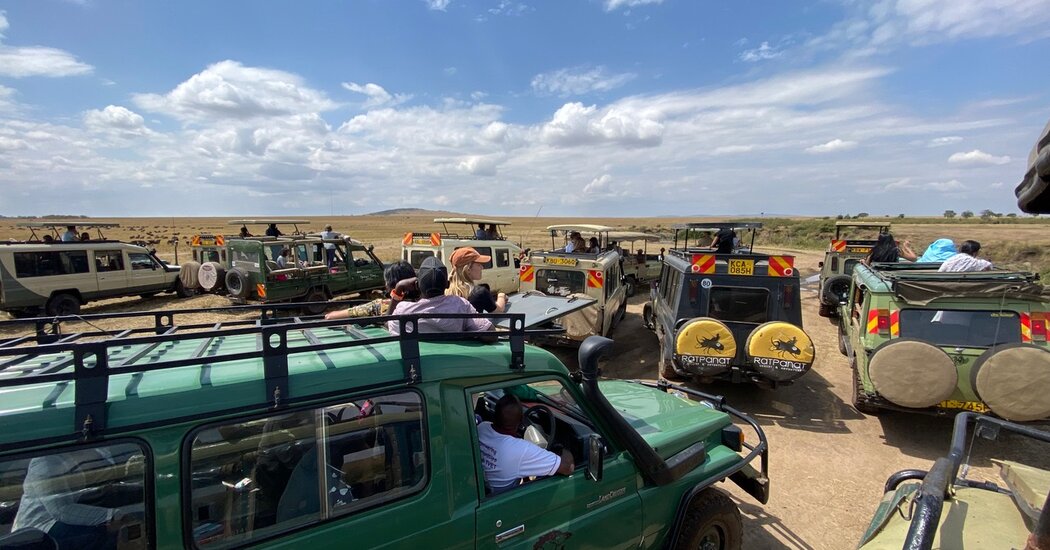 The video surfaced online around October. Filmed from a distance, it shows an antelope grazing on the African plain. Suddenly, two cheetahs race toward it and the antelope takes off, running toward the camera. But the cats are too fast. They converge on it and bring it down. They begin to feed.

Almost at that exact moment, a second drama unfolds: The safari vehicles that have been parked in the background begin to move. One dark-colored 4×4 hits the gas and begins driving closer to the animals. Then vehicle after vehicle is on the move — green, brown white, in various states of repair. You can hear the voices of the guides within yelling at one another. Some start to honk their horns. The vehicles form a circle, jockeying for position as their passengers hold up cellphones to record the cheetahs and their meal.

A woman’s voice can be heard in the background. “Are they stupid?” she asks.

The video was filmed in the Masai Mara National Reserve in Kenya, home to many of the Big Five animals (lions, leopards, elephants, buffalo and rhinoceroses) that safari participants tick off their lists. The identity of the video’s creator remains unknown, as does the date it was shot.

It was originally shared by a Twitter account using the name @DrumChronicles and has been viewed more than 175,000 times since it appeared. Guides and conservationists who have seen it said the video underscored a problem many of them have observed since the Kenyan government began lifting most pandemic-related travel restrictions: safari vehicles packed with cellphone-wielding tourists led by guides who are willing to get too close to the animals.

Overcrowding at popular safari spots was a serious issue before the pandemic, but as tourists have returned to Kenya, the problem has come back with alarming speed and “appears to be heightened by pent-up travel demand,” said Judy Kepher-Gona, director of the Sustainable Travel and Tourism Agenda, an organization based in Kenya that has called for stricter monitoring in the reserve.

“Sadly, what is seen in this video is the rule and not the exception in Masai Mara reserve,” she said.

In February, a Toyota Land Cruiser carrying tourists got so close to a family of cheetahs, the vehicle nearly ran over one of the cubs.

In August, Simon Espley, the chief executive of Africa Geographic, a travel and conservation company, watched in horror as 60 vehicles idled on both sides of the Mara River, which runs through the reserve, mere feet from…