The ‘Real’ China – The Ancient Village Of Chengyang 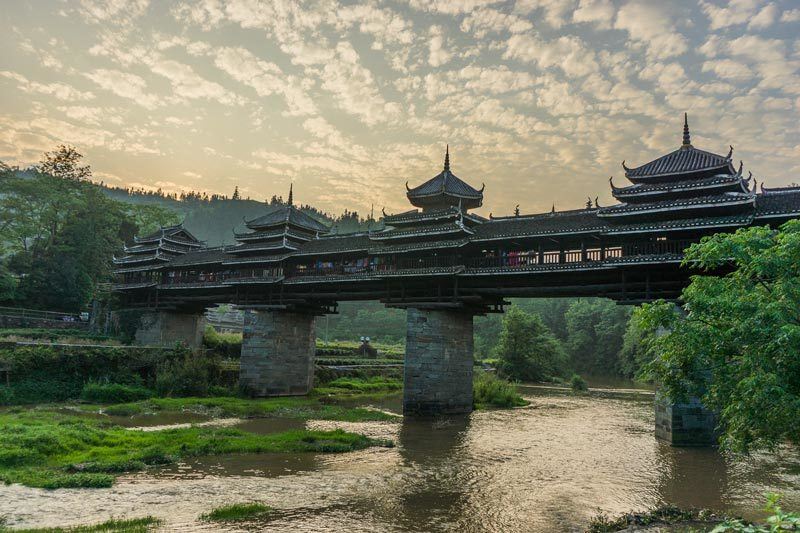 Before we had stepped foot in China we had visions of big cities like Shanghai and Beijing, smog, traffic and litter. Of course we knew there was a lot more to this vast nation, but we weren’t exactly sure what. Our first impressions in Shaxi really made us start to realise how beautiful the ancient Chinese villages could be, and the UNESCO hot spot of Lijiang proved exactly how uncontrolled tourism could potentially ruin it. And at the risk of assuming every Chinese ancient village is the same, we decided to wander out to Chengyang anyway – a small town in the Guangxi province, only two hours from Guilin City.

What we found was a quaint, bucolic pearl, complete with awe-inspiring wind and rain bridges, striking drum towers, narrow alleyways filled with the scent of spices and a fascinating Dong ethnic minority culture. Chengyang did not disappoint.

The crown jewel of Chengyang is the Wind and Rain Bridge. Built in 1912 and stretching for over 64 metres, this brick and timber bridge is designed with the traditional Chinese style that can be found throughout the ancient region. At night the Yongji Bridge lights up in spectacular fashion, glowing stunningly in the night.

For those feeling active be sure to climb up the top of the hill on the ticket booth-side of the river for some beautiful views over the valley. The hike only takes about 20 minutes to the top and isn’t strenuous. The vistas are completely worth it.

We also managed to time our trip with a cultural feast that is held every month. On the first Saturday of the month (though we’re not positive on this date as we couldn’t find a definitive answer from locals), the Dong minority families get together to have huge communal dinners in the public squares. For the cost of 60RMB we could sample any of the hundreds of dishes prepared by the women of the households in Chengyang. Fried peppers, barbecued pork, sauteed vegetables and a host of unrecognisable meat were on offer. Afterwards traditional dances take place on the stage and there is plenty of rice wine to consume. If you manage to be in town for this extravaganza, don’t miss it!

Chengyang was more than a pleasant stopover – it helped to make us fall in love with rural China again. The cities and long transport between destinations was quickly grinding us down, but being lost in the meandering alleys of this ancient Dong village replenished our souls.

How To Get To…