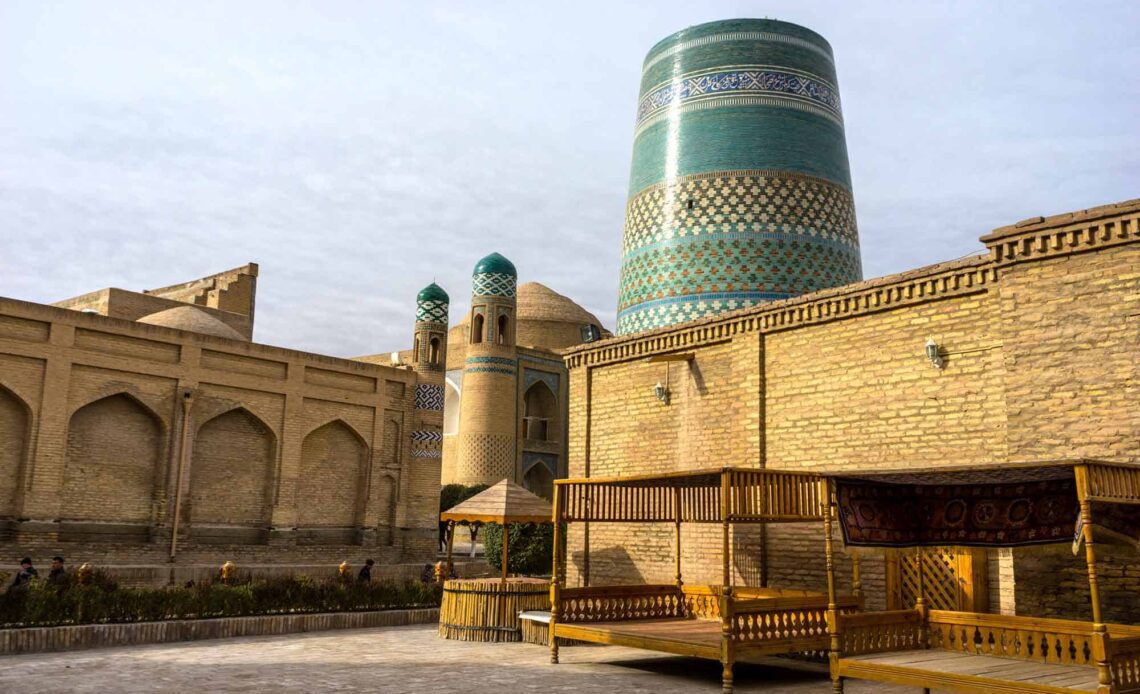 Need a guide to the best things to do in Khiva on your travels around Uzbekistan? You’ve come to the right place!

Khiva is the final Uzbek city that lay on the ancient silk road. It is very different from Uzbekistan’s other major silk road cities of Samarkand and Bukhara.

Modern Samarkand has grown around its spectacular architecture and Bukhara has retained its ancient centre as modern developments have grown around it.

Khiva is unique in the fact that its old city walls still stand proudly in the middle of the desert.

With its ancient city so well preserved, it’s a spectacular open-air museum offering plenty of incredible things to do in Khiva.

As you wander along its cobbled streets, take a moment to take in everything around you as there are very few structures like Khiva left in this part of the world.

Historically Khiva is as well known for being a bustling centre of trade and commerce along the ancient silk road with much of the cities wealth being generated from slavery well into the 19th Century.

On the outskirts of Khiva, you will find the Elliq-Qala forts. A collection of at least 20 fortresses in the middle of the desert. Although some have sadly succumbed to the ravages of the deserts the ones that are still standing are spectacular.

Sadly many travelers skip Khiva because of its distance from most of Uzbekistan’s other major tourist destinations. However, it’s quite easy to incorporate it into a two week trip including a trip to the fabled Aral Sea.

Let’s check out some of the best things to do in Khiva.

The Best Things to do in Khiva

The vast majority of Khiva’s sights are located within the walls of the Ichon Kala, the walled city for which Khiva is known.

Therefore the sights can be found within a small area, unlike in Tashkent and Samarkand where things a much more spread out.

You can purchase a two-day ticket from the west gate which covers the entrance fees to all of the mosques, madrasas, minarets, and museums inside.

If you’re not sure what to do in Khiva then these tickets can serve as a source of inspiration.

This is probably Khiva’s most well-known sight. As soon as you enter the western gate you will be able to see it in all its glory.

Whereas most minarets are tall, slender, and rather plainly decorated, the Kalta Minor Minaret is the exact opposite. It’s short, fat structure…