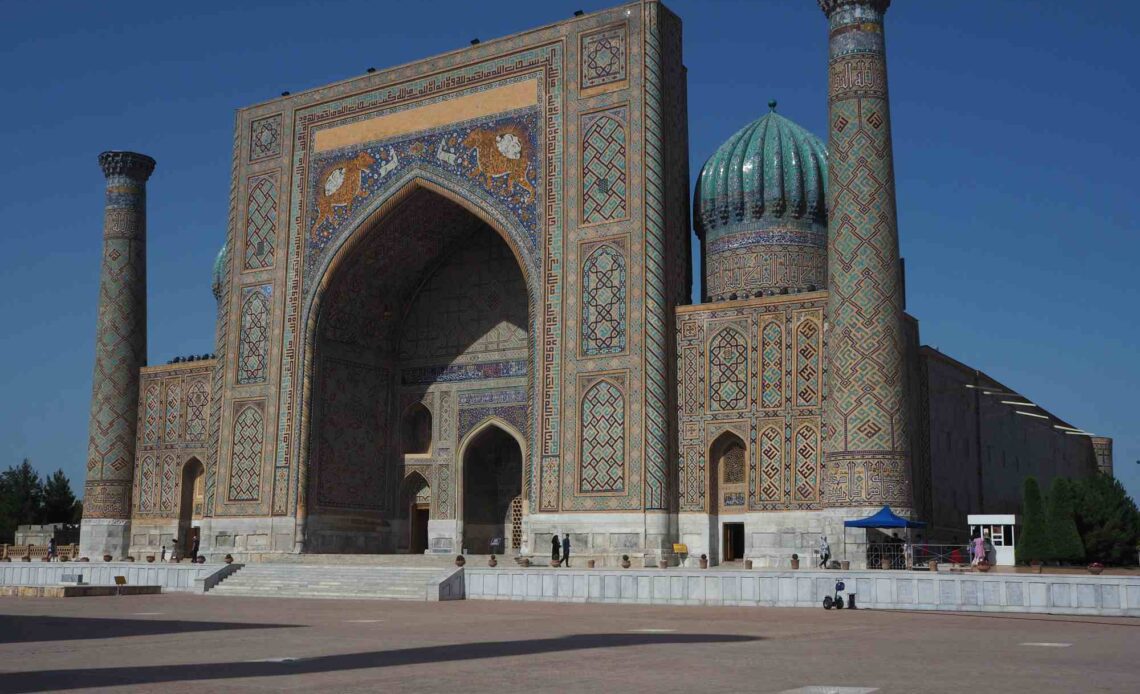 From visiting the shrinking Aral Sea to exploring the architecture of the Registan in Samarkand, here’s our list of the absolute best things to do in Uzbekistan.

For millennia the cities of modern-day Uzbekistan were some of the most important along the ancient silk road.

Traders and merchants would gather in Samarkand, Bukhara and Khiva to buy, sell and trade their goods.

The borders of modern-day Uzbekistan were created by a certain Josef Stalin, and bear little resemblance to the cultural and linguistic divisions that already existed in the region.

Although the national language is Uzbek, you will be able to get around with Russian, as in all former Soviet nations.

English is usually spoken in hotels and guesthouses although this is certainly not a given. Outside of that environment, English is rarely spoken.

Uzbekistan ranges from the mountainous Fergana Valley and the Tajik border in the east, to sprawling deserts of the west.

This mix of climates and landscapes is one of the things that makes Uzbekistan particularly unique.

Uzbekistan is also home to some of the worlds most spectacular Islamic architecture, history at almost every turn, plenty of Soviet memorabilia, and the best plov in Asia.

READ MORE: Be sure to use this guide to plan your trip to Uzbekistan!

The Best Things to do in Uzbekistan

If you’re not sure what to do in Uzbekistan then check out this article for our rundown of the best things to do in this rarely visited nation.

Tashkent does get overlooked at times, with many preferring to focus on the counties other big hitters, however, the largest city in Central Asia is home to some pretty awesome things to do.

So make sure you give yourself a few days here to explore!

1) See a Play at the Navoi Theatre

This gorgeous Soviet era theatre is a great place to catch a ballet show. Don’t expect anyone at the ticket office to speak English, so you’ll need a mixture of google translate and some Russian.

We bought tickets to a ballet show, and then on the night, it had changed to a performance of classic Russian dance.

Nonetheless, it was a fantastic show.

2) Chow Down at the Chorsu Bazaar

The Chorsu Bazaar’s blue dome is one of Tashkent’s, and indeed Uzbekistan’s most iconic sights. The bazaar spills out of Chorsu and onto the surrounding streets and is always buzzing with life.

Inside the main building itself expect to find meat, mounds of spices, fruit and vegetables, of both the fresh and…