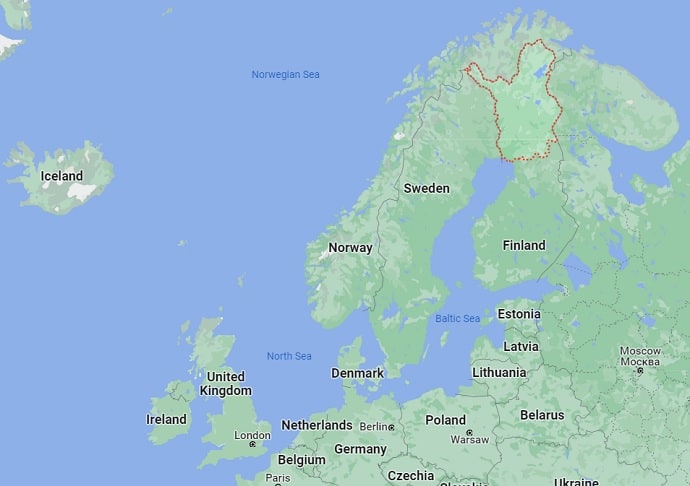 Few places are as magical as Finnish Lapland in winter. The land is covered with a blanket of soft, fluffy snow. The air is crisp, and skies are often clear, offering great sunsets and stunning starry skies at night.

Yes, it is cold: Temperatures often plummet below -20. But the scenery and warm, golden light more than make up for it!

Not to mention the fact that in Lapland, Finland you’ll have the chance to try some activities that are not available anywhere else in Europe.

Lapland is in the Arctic Circle, in the northern region of Scandinavia, and covers parts of Norway, Sweden, Finland and Russia.

It is the cultural region home to the Sami People who prefer to call the region as Sápmi (in their native language).

Lapland, Finland comprises the northernmost section of the country. Because of the abundance of reindeer and spruce trees the area is often associated with Christmas.

We spent a week in the region in total, dividing our time between two locations.

The first was Kemi, a small town on the coast next to the border with Sweden. The second was Salla, a village close to the Russian border in the eastern part of Finland.

It was a week filled with dogsledding, cross country skiing, reindeer sleigh rides, walks in the snow-covered forest and nights huddling in front of the fire, waiting for the northern lights (which we didn’t manage to see).

But no matter: The frozen scenery, eerie silence and winter lights were enough for Lapland to become one of our favorite travel experiences to date.

Below are our 20 favorite photos of Finnish Lapland in Winter.

READ MORE: What Is Ecotourism? (The History & Principles of Responsible Travel)

We flew into Helsinki from Italy. Once we arrived in Finland, we decided to travel by train because they’re much more eco-friendly and afford greater flexibility.

Finnish trains are generally comfortable and reliable, and wi-fi is usually provided for free.

We had an Interrail pass, which meant we could hop on and off at will. Unless you’re planning to travel at night, reservations are not necessary.

READ MORE: The Effects of Mass Tourism (How Overtourism is Destroying 30+ Destinations)

Our first stop was Kemi, the capital of Coastal Lapland. Kemi is famous for its Snow Castle (called Lumi…