Southwest and Other Airlines Cancel Thousands of Flights Across the US 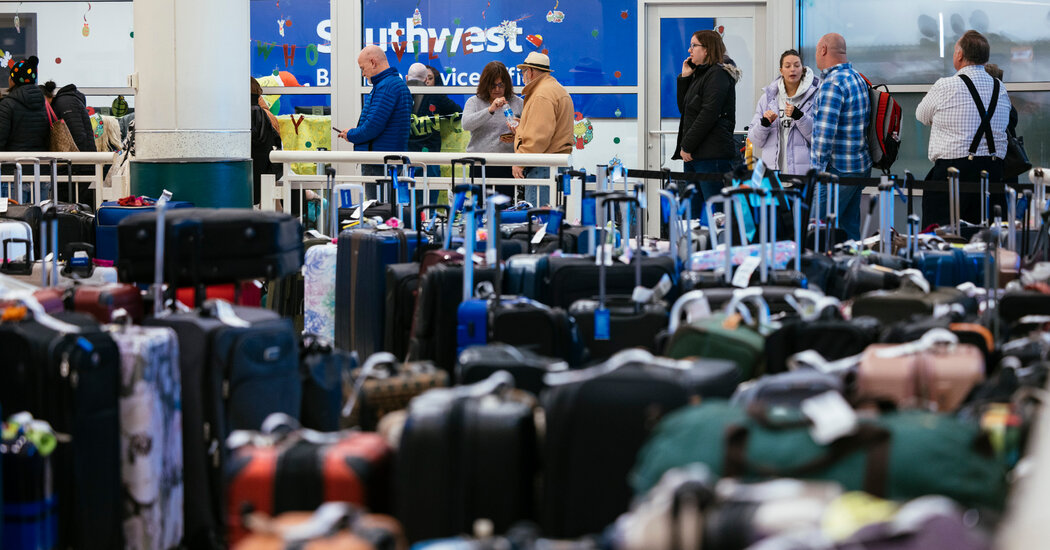 Southwest Airlines canceled thousands of flights on Tuesday and Wednesday, as the company struggled to recover from a deadly winter storm that has left holiday travelers stranded around the country.

The disruption to the company’s operation could continue for several days. At many airports where Southwest flies from, people resorted to sleeping on floors and waiting hours in line.

By around 11:30 a.m. Eastern time on Tuesday, more than 2,900 U.S. flights were canceled and more than 2,400 others delayed, according to FlightAware, a flight tracking service. Most of the cancellations — more than 2,500 of them — came from Southwest, which had already called off more than 60 percent of its flights for the day.

Aviation experts said the storm had a disproportionate impact on Southwest because the company configures its network in a very different way than other large airlines, like American Airlines and Delta Air Lines, do. Southwest, which has long prided itself on having good relations with its employees, has also recently struggled with staffing shortages that has heightened tensions between management and workers, said Robert W. Mann Jr., a former airline executive who now runs the consulting firm R.W. Mann & Company.

“Southwest clearly took the worst of this,” Mr. Mann said. “I’ve got to think it was cultural more than anything else.”

By late Monday and into Tuesday morning, Southwest was in damage-control mode, responding to angry and frustrated customers on Twitter. The airline repeatedly apologized for the cancellations and offered assistance through direct messages. The airline called its problems “unacceptable” and said it was doing all it can to move crews to where they were needed to restore its system.

“Our biggest issue at this time is getting our crews and our aircraft in the right places,” Chris Perry, a Southwest spokesman, said in an email.

The U.S. Department of Transportation said in a statement on Monday that it would look into the problems at Southwest, adding that it was concerned by the airline’s “unacceptable rate of cancellations and delays” and reports of poor customer service.

Henry Harteveldt, an airline analyst at Atmosphere Research Group, said in an email that Southwest’s structure made it…