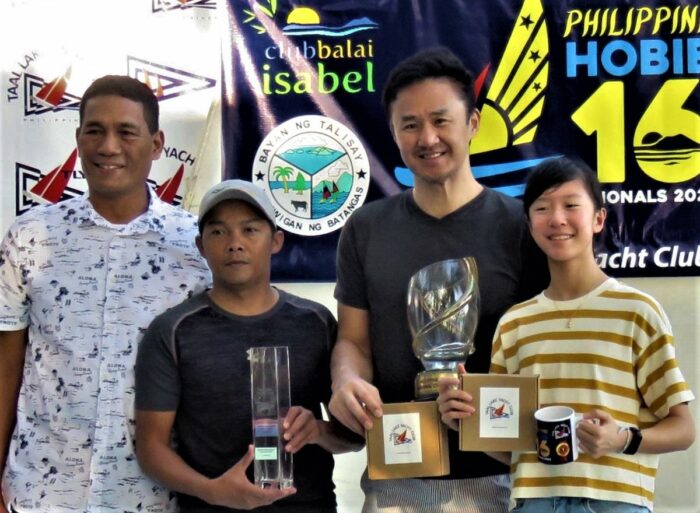 After a two-year suspension due to the pandemic, competitive sailing has returned to Taal Lake Yacht Club (TLYC) with the holding of the recent 2022 Philippine Hobie 16 National Championships, the country’s longest-running Hobie sailing tournament.

Situated by the lakeshores of Talisay, Batangas, and a jump-off point to Taal Volcano, TLYC has been dubbed by Lonely Planet as the country’s “sailing mecca” because of its ideal winds the whole year round.

For the tournament’s 24th edition, two doctors proved their mettle outside the medical field as they dominated the five-race competition.

The awards were presented by Talisay municipal Mayor Nestor Natanauan.

The Hobie 16 National Championships started in 1995 at its TLYC homebase, and was rotated around Subic Bay, Laiya Beach in San Juan, Cebu, Anvaya Cove in Bataan, and Punta Fuego and Tali Beach in Nasugbu, Batangas.

In an adjunct tournament held the next day, TLYC commodore Peter Capotosto and Jazmine Lucero of topped the Governor’s Cup, a new single-race format that sailed around Taal Volcano.

The sailing events were sponsored by San Miguel Beer, Club Balai Isabel, Barako Coffee, and Active Boating and Watersports as media partners, and supported by the Municipality of Talisay and the Province of Batangas.