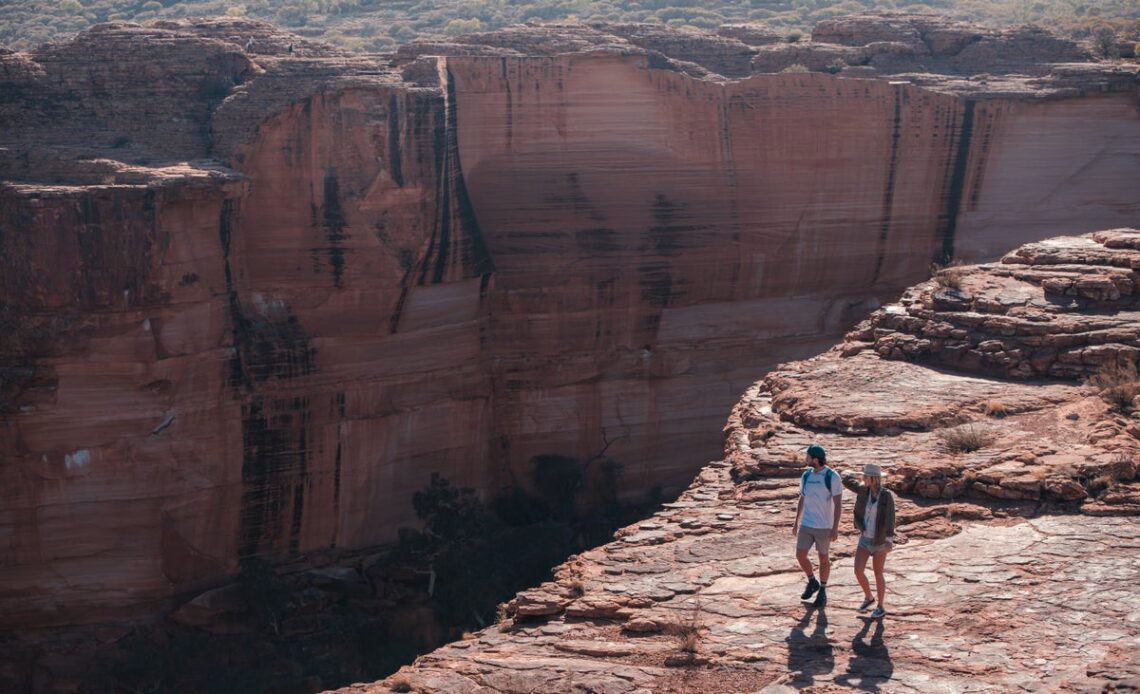 From a natural platform high above King’s Canyon, you see how time and nature can create an image of sheer beauty in one of Australia’s most remote corners. Four hundred million years ago this was a windswept sandstone plain covered in sand dunes. Today, the canyon is at the heart of Watarrka National Park.

The 6km Rim Walk provides a sequence of magnificent views, as the walls drop 100m from the plateau to the floor of King’s Canyon. And after you have seen the view from the top, you can wander through the creek that formed the canyon. Plants and trees thrive here, because the walls of the valley shelter them for much of the day from the intense sun. The vivid pinks and purples of Sturt desert roses – the floral emblem of the Northern Territory – provide delicate reminders of nature’s creativity.

“We had amazing populations of mega fauna throughout central Australia,” Jared Archibald, Curator of Territory History at the Museum and Art Gallery of the Northern Territory, tells me. Humanity, he says, is a relative newcomer here – and was predated by some extraordinary creatures.

“Things as large as a rhino, that were marsupials, giant kangaroos and giant birds. They lived around 7 million years ago and by about 40,000 years ago they all died out. They are only now found in the fossil record in central Australia.”

The canyon is an important location for the Aboriginal custodians of Watarrka – who have made it home for more than 20,000 years as the world’s oldest continuous living culture.

Established rather more recently, in 1981: Kings Creek Station, which is all things to all travellers. This vast ranch covers 2,000 square kilometres – about the same size as the country of Luxembourg.

One corner is punctuated by a roadhouse. You can refuel your vehicle and your stomach, stay overnight and get up-to-date information from the friendly staff – including Jess Martin.

“I love being remote, I love being away from the big cities and this place,” she told me. “The red centre of Australia pulls at your heartstrings – it really gets into your blood.”

As the number plates in the Northern Territory proclaim, this is Outback Australia. A high-speed buggy ride across the rugged terrain presents a different and thrilling dimension to this remote land. You speed across deep red sand, past desert oaks – the most tenacious trees in these parts.