Camping at Darvaza – The Door to Hell in Turkmenistan 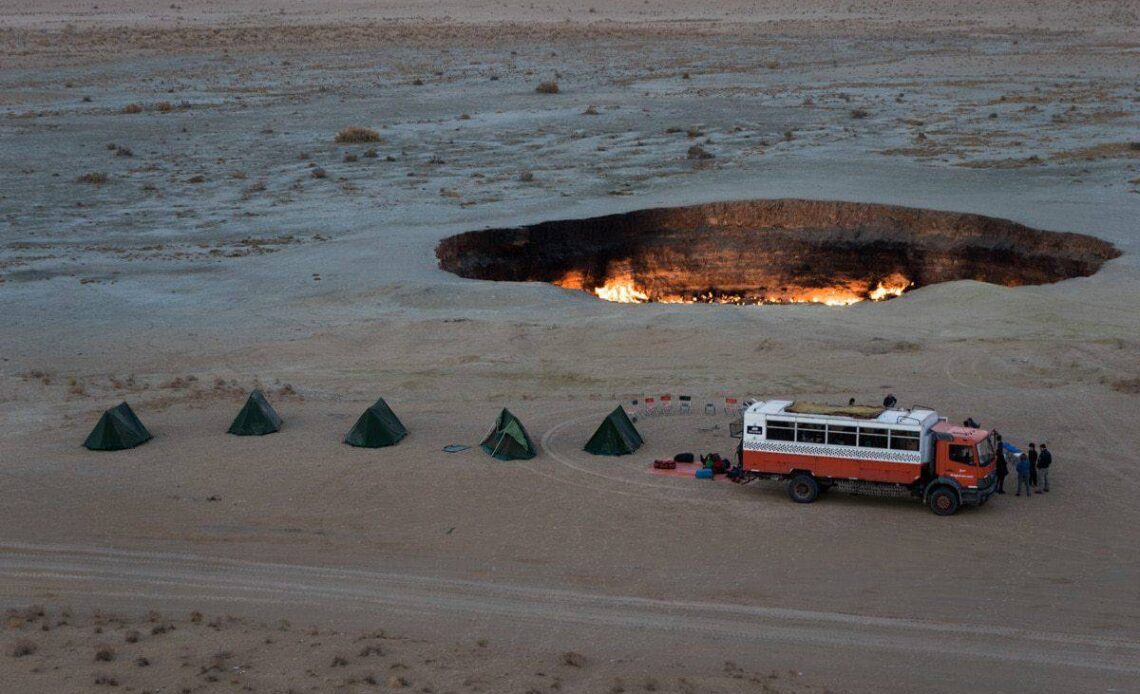 Scarring the earth like a vicious pockmark, the Darvaza Gas Crater burns ferociously in an intense, permanent rage.

Sunken into the heart of Turkmenistan’s Karakum Desert, the flaming circular pit has become known as the “Door to Hell”, inspiring images of a fabled entrance to Lucifer’s Underworld.

Completely remote in an already isolated nation, it may just be Central Asia’s most peculiar attraction.

But despite the obvious appeal to intrepid travellers, very few people actually have the chance to see this curious spectacle.

The Darvaza Gas Crater only came into existence relatively recently.

In 1971 a Soviet team were conducting oil exploration with a drill rig when a natural gas field collapsed in the Karakum Desert, creating a gaping scar.

Methane began leaking into the atmosphere from what turned out to be the sixth largest gas reserve in the world.

How the crater became the burning pit of hell is a disputed mystery, but many believe geologists deliberately ignited the gas, hoping it would extinguish in a few days.

Over 40 years later, it is still alight.

As we were drawing up our plans to cross central Asia we knew that we would have to add the Darvaza Gas Crater to our itinerary.

However trying to get to the Door to Hell is a tough affair. Besides its remote location, there are no signs to alert travellers of its whereabouts and no common methods of transport to get there.

Most people do day trips from the capital city Ashgabat, spending hundreds of dollars for the chance to see the crater for just a few hours.

Even more difficult is just being approved for a Turkmenistan visa in the first place.

Travelling to the ex-Soviet nation is a mission in itself. Turkmenistan already has some of the strictest visa laws of any nation on the planet.

Independent travel is almost impossible, with the only option of entering Turkmenistan being on a difficult-to-attain transit visa.

These are valid for between 3-5 days and are date and location specific. The process is often delayed for weeks on end, or denied without reason.

The only way to arrive on a longer tourist visa is by joining a group tour, being escorted by a government-approved guide everywhere you go.

It may not allow for independent travel, but it does let tourists stay past 5 days and explore more thoroughly.

This was the option we ended up taking.

We visited Turkmenistan with the overland adventure tour company Dragoman, which not only…