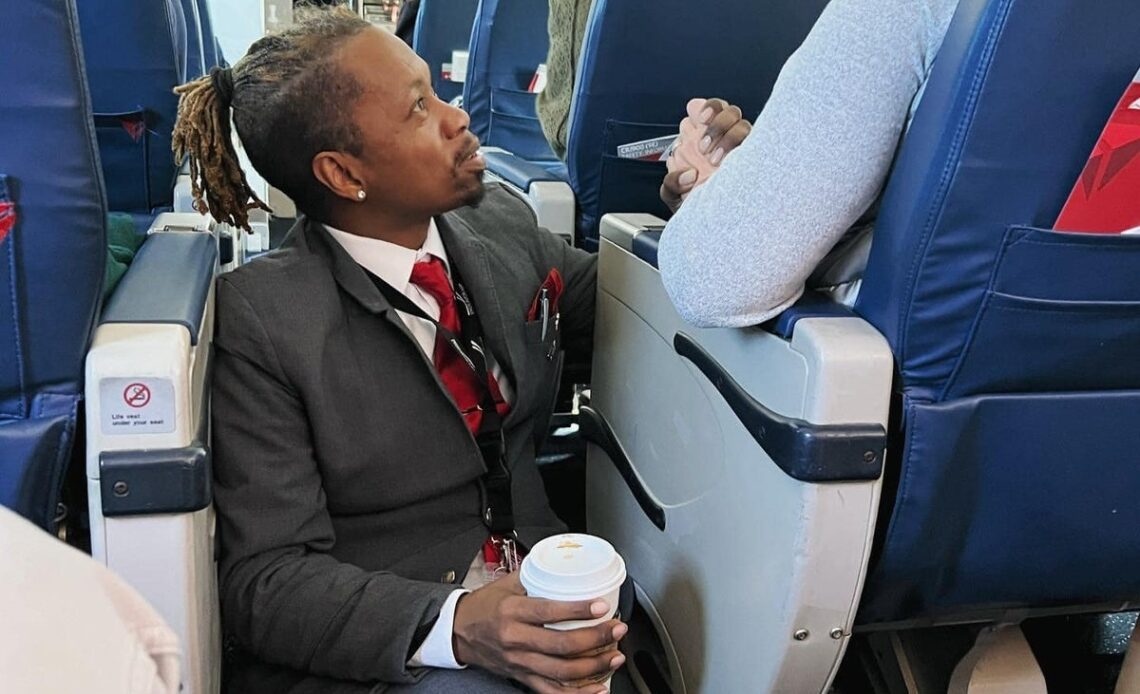 A Delta passenger has raved about a flight attendant who went above and beyond in soothing a passenger with a fear of flying.

The woman posted photos to social media of a male crew member sitting in the aisle, holding a female passenger’s hand, saying that he had “explained every sound and bump” that worried her.

“Check out this gem of a flight attendant that was on our flight from CLT to JFK,” wrote the passenger, Molly Lee, from Raleigh, North Carolina, in a Facebook post that was picked up by viral account Social Junkie.

“This woman was so nervous about flying, so he explained every sound and bump and even sat here holding her hand when it still got to be too much for her,” she recalled.

Ms Lee also appeared on radio station WXII enthusing about the crew member’s kindness, saying she had spotted him on a flight to New York’s JFK airport on 14 January.

She told presenters the nervous woman had made her fear known to a few passengers around her before the flight took off.

“[The flight attendant] took notice of that and said, ‘I’ve got you,’ and just was very reassuring, just told her not to worry, it was going to be totally safe and she was tearing up,” said Ms Lee.

“I has to take a picture because it was moving. It was so beautiful to see somebody just extend their heart like that to a stranger.

“With every little noise, she’d be like, ‘What’s that?’” she added. “[He would say], ‘That’s OK. That’s just the jet bridge pulling away’ or whatever the case may be. And that really helped her.”

She reiterated that she feels the flight attendant deserves recognition from his employers for being so reassuring in the situation.

“I just really hope that Floyd gets what he deserves, which is everyone’s love, everyone’s praise, everyone’s admiration. I’m so happy that he’s getting that recognition. And I really hope it leads to good things for him,” said Ms Lee.

The Facebook post featuring her photos has already received more than 500,000 likes and been shared 21,000 times. Commenters were moved by the flight attendant’s basic act of kindness.

“MY GOODNESS, MY GOD, THIS PHOTO IS EVERYTHING I WISH THE WORLD WAS ON A DAILY BASIS AND WHY I STILL BELIEVE!” wrote one follower, Kevin…