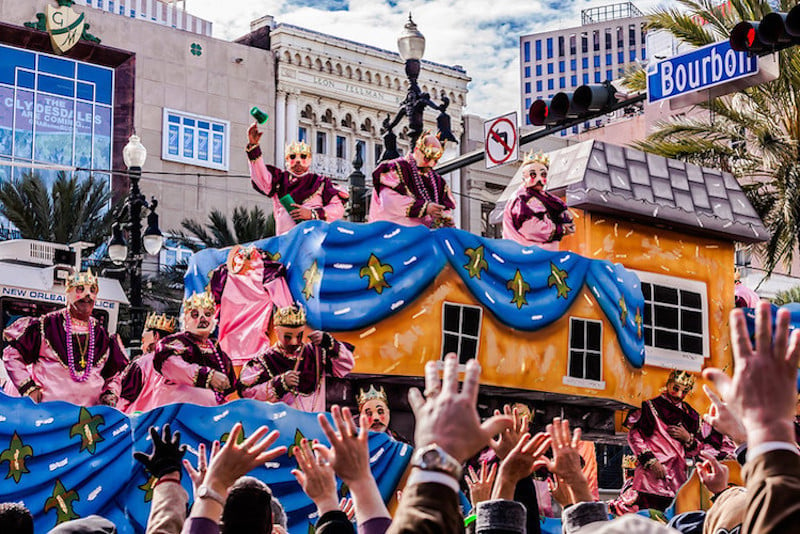 So, you want to come to see a Mardi Gras parade? We’ve got all the tips and tricks to help you experience New Orleans Mardi Gras like a local.

First, let’s get some basics out of the way. Mardi Gras always falls on a Tuesday, but it’s a different date every year. For 2023, Mardi Gras day is February 21, 2023. In 2024, it will be February 13. One of the biggest misconceptions is that it’s just one day – really, the Mardi Gras season lasts for weeks.

Carnival season officially begins on January 6 (the Epiphany or Twelfth Night) and runs until Ash Wednesday, when Lent begins. There are plenty of Mardi Gras festivities to enjoy all season long, in addition to the actual Fat Tuesday.

Although Mardi Gras is mostly associated with New Orleans, all of Louisiana joins in on the fun. So while we’ll just be covering Mardi Gras for New Orleans, keep in mind the party is all over the Pelican State!

To experience Mardi Gras like a local, you’ll need a few Mardi Gras terms in your vocabulary:

This is the organization responsible for the planning of the specific Mardi Gras parade. Every parade has its own krewe. While we generally think of a krewe as just the folks on the float, it’s actually a much more complex process with many individuals in Mardi Gras behind the scenes working year-round to ensure the parade can roll.

Some Mardi Gras krewes can reach 3,000 to 5,000 people easily. Each Mardi Gras krewe has a unique theme, which changes every year. Some krewes have been around for ages, while other krewes are newer.

The oldest Mardi Gras krewe is the Mistick Krewe of Comus, which was founded in 1856. While the krewe is still around, it hasn’t rolled a parade since 1991.

Learning the krewe history of your favorite parade will give you a new appreciation for how intricate Mardi Gras is. It’s a bit of a secret society at times!

Every krewe has a royal court that leads the parade. The king can be a notable New Orleanian or a more famous figure, but generally, their identity is closely…